McAuslan Brewing began operations in January of 1989. Located at 4850 St-Ambroise Street in Montreal’s St-Henri district where it has established itself as Quebec’s foremost micro-brewery.

It is the result of founder Peter McAuslan’s belief that he could brew a better beer and that Quebec consumers would provide a loyal following for it. Although he had been brewing his own beer for more than 25 years, it was only during the early ’80s that he began seriously considering going into commercial brewing.

Alongside brewmasters, Alan Pugsley, Ellen Bounsall, and a team of people with the skills and temperament to make the venture a success, Peter set about the important task of establishing the brewery’s reputation for distinctive beers that have since been acknowledged by critics internationally as being among the world’s best. The brewery’s beers have now won over 12 medals in international competitions.

The brewery launched its first beer in February 1989, St-Ambroise Pale Ale which was an immediate success with its distinctive hoppy-ness and clear reddish hue that set it apart and gained it an instant following. Since that time McAuslan has steadily expanded both its brewing capacity and its place in the market introducing other beers like St-Ambroise Oatmeal Stout; the Griffon brands, Griffon Extra Pale Ale and Griffon Brown Ale, Frontenac and a family of seasonal beers : Apricot Wheat Ale, Raspberry Ale, Spiced Pumpkin Ale and Strong Ale.

In 2013, after a successful venture, Peter planning his retirement sold the remaining shares to his partner of 5 years, Brasseur RJ, a consolidation of microbreweries, whom he knew would give the brewery a fresh approach while conserving the McAuslan brewing traditions.

Following Peter’s idea for community involvement and the development of the SouthWest sector of Montreal, Roger Jaar, an international entrepreneur and owner of Brasseur RJ, didn’t just see an opportunity with McAuslan but the potential to create a movement behind the brand. With many years of experience in the beverage industry he knew the importance of making the brand known and involving the consumers so that they would become a part of the success that McAuslan is today.

The redevelopment of the Terrasse St-Ambroise, which has already benefited for years from the many cyclists and walkers who frequent the Lachine Canal, and the inauguration of the Annexe St-Ambroise, a pub, have proved successful at giving our customers a memorable experience. While the St-Ambroise interpretation center and mini brew house that allows us to experiment, complement these new infrastructures by creating new trends, educating and pushing the art of brewing even further.

Today Philippe Jaar, vice-president and director general is the face of McAuslan Brewery. With the help of his team, he has found ways to integrate a modern urban approach to McAuslan adding still new flavors, new packaging and new products to the line, like McAdam Urban Cider or McAuslan Honey Ale which are the result of the brewery’s new onsite orchard and beehives.

He is proud to meet new challenges while faithfully protecting what has been McAuslan’s strength for so many years — the outstanding quality of its beers. 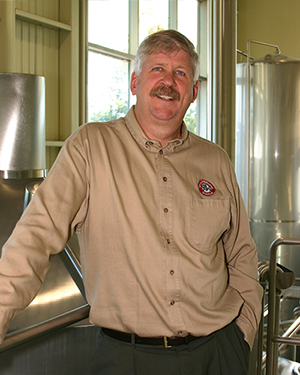 Peter was born in Lachine, Quebec, and educated at Sir George Williams University (now Concordia) where he graduated with a Bachelor of Arts in 1972.

Prior to founding McAuslan Brewing in 1988, Peter first worked for the YMCA as a community organizer and then for Dawson College where he occupied a number of management positions, rising to Secretary General in the years prior to his departure from the college. Even though he occupied the position of president general manager of his new brewery until his retirement in May 2013, Peter was always very involved in the community; he also served as the President of the Quebec Microbrewery Association, as a director of the Brewers Association of Canada and the Association of Brewers in the U.S. 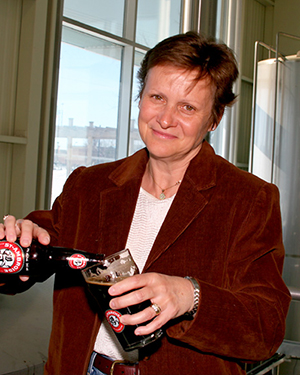 Ellen Bounsall was the Master Brewer and Vice President, Production at McAuslan Brewing until she retired with her husband Peter McAuslan in May 2013.

Born and educated in Ottawa, Ontario, Ellen earned a Bachelor of Science degree in Biology from the University of Ottawa in 1973. Eventually she decided to turn her scientific rigor to the art of brewing. She developed her brewing skills through hands on experience and by attending courses in brewing, brewing microbiology and quality control at the Siebel Institute of Brewing in Chicago.

The products for which Ellen is responsible have won dozens of national and international awards, including a gold medal for Griffon Extra Pale Ale at the World Beer Cup.

The perfect place to enjoy our draft beers.

Discover the beer production process by visiting the McAuslan Brewery.